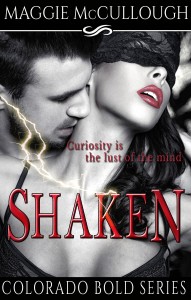 Anne Rutledge has always played it safe. Responsible. Career-conscious. Lackluster lovers. One stormy night changes everything. Anne meets a man who turns her well-ordered life upside down and inside out. Intense. Passionate. Forceful. Evan Jamison isn’t a man she can ignore. Sparks fly, ignite and spontaneously combust. Anne convinces herself a one night stand is the perfect solution.

Two weeks later and she can’t forget the wild, hot sex or the scarves Evan had tied to his bedposts; the scarves he says he’ll save for next time. She receives a text, an invitation to blindfolds and untold delights. Anne accepts; Evan doesn’t disappoint. Can Anne reconcile her chosen career with the not so proper sex she enjoys with Evan?

Kindle Unlimited it is FREE

Maggie lives with her husband in rural Colorado. Her two children and three grandchildren live within 30 miles of her. They love to see the horses and goats when they visit. She works part time for an insurance agent, happy to have left the stress and long commute of the corporate world behind her. When not writing, Maggie enjoys horseback riding and genealogical research.

A shudder coursed through her body at the sexy rasp of his voice. Her nipples tightened. Any hope that he hadn’t noticed was quashed as his gaze moved downward.

Evan reached across the counter to brush biscuit crumbs from her lips, and she was lost, mired in a swamp of sexual awareness.

Her breasts were swollen and achy.

Her nipples chafed against the cotton tee.

Evan traced the curve of her lips with his finger. She melted inside like chocolate left in the sun. A tiny whimper escaped her open mouth as he stepped back.

But only for a moment. He veered around the counter and pulled her to her feet. His eyes were deep, dark pools of passion as his hand brushed the damp curls from her brow.

He caressed one cheek, and then the other, held her head between his two hands. The intensity of his expression made her go weak in the knees.

She held her breath as he lowered his lips to hers. Hallelujah!

His kiss was neither tentative nor sweet. It was hungry and possessive; it claimed ownership, commanded submission.

Not that she minded.

Anne stood on her tiptoes, arching into his body. She couldn’t get close enough to Evan. Her heated skin sought contact with his masculine strength. His tongue demanded entrance; it became a mating invitation she was all too willing to accept.

He plundered her mouth, a purposeful foreshadowing of his ultimate objective.

Evan held her close, lifted her feet off the floor, and pressed her against the wall. Anne moaned and melted into him, molding her form against his.

What is it about this man?

She was a mess, a complete and utter wreck, after just one kiss, eager to submit to his every desire.

He captured both of her hands in one of his, pulled them above her head and held them there. He slid his other hand down her bare leg—thank God she had waxed yesterday—and, with a little hitch, pulled her upwards, snug against his groin.

She wrapped her legs around his waist; the soft silk of the borrowed boxers seemed non-existent as the firm length of him nestled hard and heavy against her heated core. She whimpered and trembled as he ground his hips on her sex.

Evan groaned deep in his throat and thrust her against the wall.

His husky growl ignited her body.

His free hand made its way under her tee and cupped an unfettered breast, swollen and aching for his touch. Anne moaned sweet encouragement, whimpering as he rolled the hardened tip between his work-roughened finger and thumb.

With an impatient tug, he pulled her tee over her face, leaving her bosom bare. His mouth suckled one peak while he continued to manipulate the other with his hand.

The sensation was raw. Her body went up in flames. She arched into his groin, seeking the more intimate contact her swollen flesh demanded.

Another up thrust of his hips spread her legs enough to allow the rigid seam of his fly to press on her desperate nub.

Blue-Shift Into My Young Adult Universe

Welcome to See The Good

See The Good is about learning how to embrace all of the positive aspects of your life !

Interactive Books where YOU are the hero

A blog about chronic illness and chronic pain life

UNTIL THE END - BLOG POSTS FROM JULY, 2012 THROUGH PRESENT

Not your momma's social media

I bow to the Divine in you; Namasté

The second time around

Life after an attempted suicide.